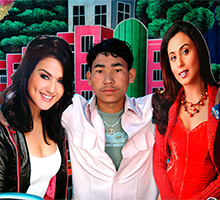 I was looking at props in a makeshift studio in Aligarh Numaish (fair) and spotted this boy. Chotu, as he introduced himself, was willing to get photographed with Bollywood actresses. I spotted cutouts of Rani Mukherjee and Pretty Zinta standing in a corner with colourful backdrop of skyscrapers. Chotu paid to the photographer and rushed to stand with cutouts throwing his arms around their necks. When I asked him to hold for a while, he bluntly refused saying that he don’t have any money left to pay for more photographs. It took sometime to convince him that he need not to pay me. He went back happily and stood again.
Chotu is from Nepal and works at a nearby tea stall. Dreamers like Chotu help these studios to sustain in the time of phone cameras.