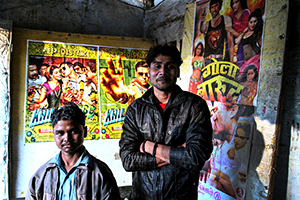 Touring talkies are history now but when I found one in Mehndawal, I was excited to explore as what genre of films they run, who are their viewers in a time when everyone with a mobile phone has a versatile touring talkies in the pocket. I met these guys who run the movies, manage tickets, theatre & generator also. Posters of Akshay Kumar & Nirhua films were displayed & also of an adult movie with a kissing couple on it. Inside the theatre, people were sitting on wooden benches, few of the smoking beedi, others crossed legged watching the movie being played on small sized television set. Either they were there to kill the time or under the effect of lust that posters evoke.